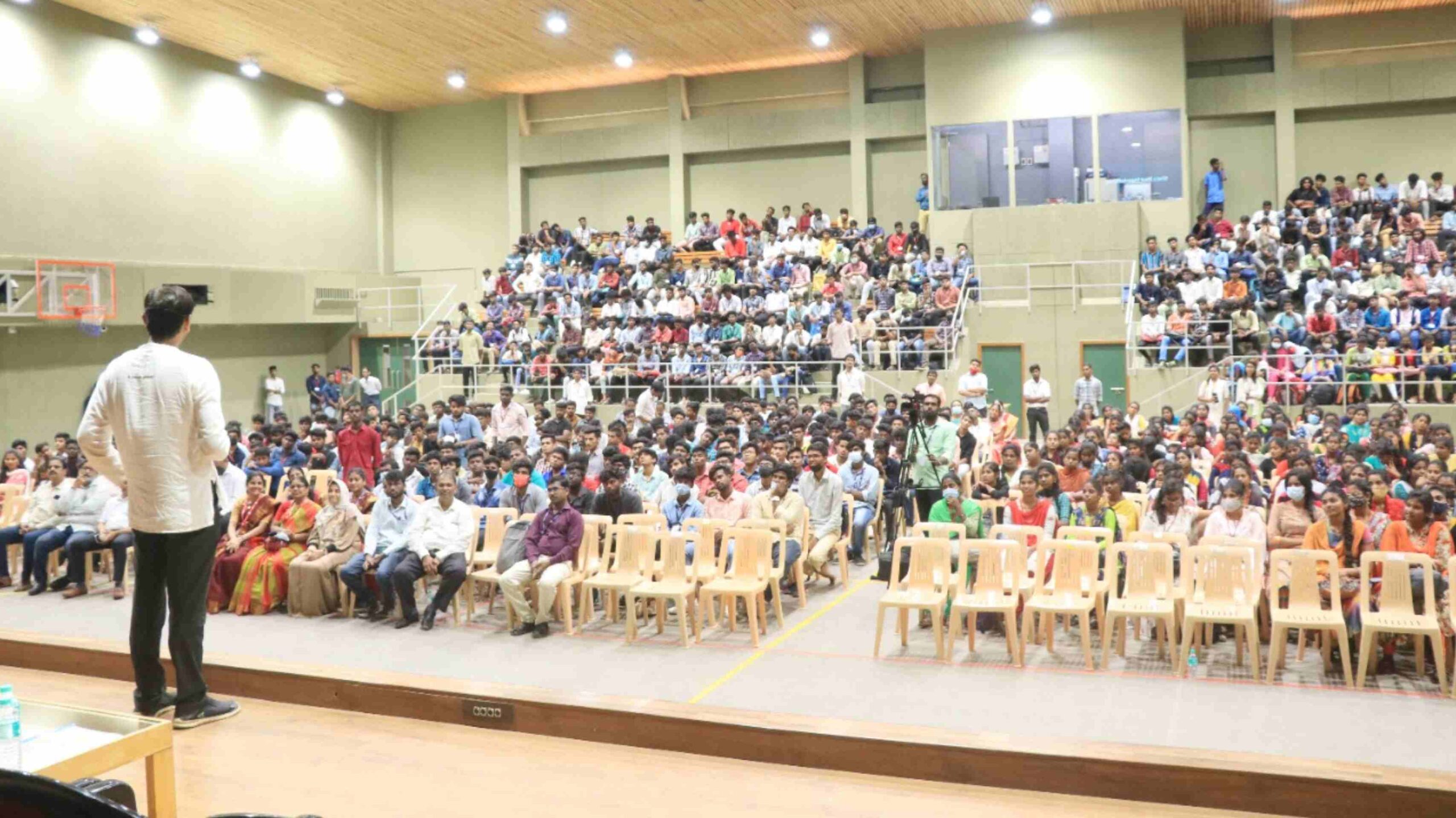 Chennai 22 APRIL 2022 Agurchand Manmull Jain College invited Dr Chetan Singh Solanki, ‘The Solar Man of India’ to give a talk on ‘Energy Swarajya’ to their students on 22nd April 2022. Dr Solanki, has been living in his ‘Solar Bus’ from 2020 and will be travelling all over India until 2031 to sensitise people on ‘Energy Swaarajya’. Commemorating the ‘Earth Day’ Dr. Solanki said that he was launching the Energy Swaraj Club later in the day. Speaking on the occasion, he emphasised on the need to address the issue of heavy energy dependence on fossil fuels and switch to 100% use of Solar Energy. He wanted everyone present to be responsible about their energy consumption. He urged the students to contribute to the solution and not pollution. He highlighted the connection between energy dependence, the nation’s economy, global warming and human survival and existence. He alerted the students that the earth’s temperature is rising mainly due to the CO2 emission which is 48% above the permitted levels. Global GDP increases while Nature’s health decreases, he said. Excessive use of fossil fuels like coal, gas and oil as the main sources of energy has resulted in this he added. Furthermore, natural disasters like heat and cold waves are also on the rise, for which immediate action is absolutely necessary, he stressed. ‘ Now or Never’ he cautioned. His solution is to switch to 100% Solar Energy for all our energy needs.

Dr. Solanki suggested a two rule “fundamental laws of human existence – limit the consumption and localise the production” as a sustainable solution for the problem. Besides, he necessitated a 3-step approach – Avoid (use of energy), Minimise(consumption) and Generate (Solar Energy) to switch to 100% Solar Energy. This, he added, will also generate jobs and add to the economy.

He wanted everyone to act on spreading awareness about Energy Swaraj Movement. He urged Institutions and individuals to lead the Movement, by starting and spreading Energy Literacy, Certification, reduce energy consumption, encourage others too, start Energy Swaraj Club.  Dr. Solanki urged the students to spread awareness through social media on this energy independence movement.

He warned that absence of effort now will make temperatures rise at least by 3°C and hence demanded that each one should accept responsibility for the change.  An interactive session followed the talk. Among the many questions, there was a question on how countries in the polar regions would generate Solar Energy. To which he said there are alternate sources like bio mass that are also available.

The students were then allowed to visit his ‘home’ – a solar bus, in which he is going to live for 11years and travel around the country.

In tune with the Jain philosophy of ‘Parasparopagraho Jivanam’ – the function of the soul is to help one another’, Agurchand Manmull Jain College, is committed towards creating a sustainable environment that ensures peaceful co-existence. The Institution’s motto is, ‘Sa Vidhya Ya Vimuktaya’-‘Knowledge leads to Liberation’. Our Institution firmly believes in imparting knowledge with values.

To sensitise students about sustainable development and environmental protection, the Institution has  already installed solar panels in the campus. This would go a long way in shifting the focus towards renewable energy sources, which is the next big step in building a sustainable environment for generations to come. Besides, the institution also conducts programmes to spread this awareness.

In connection with these initiatives, the Institution is building an enduring relationship with the Swaraj Foundation to contribute to the society as a disseminator of Eco-Knowledge.

VINAYAKA MISSION’s RESEARCH FOUNDATION  (DEEMED TO BE UNIVERSITY) APPOINTS DR. ANANTH PADMANABHAN AS THE NEW DEAN OF THE LAW SCHOOL