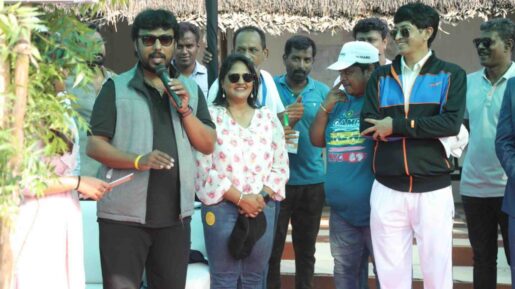 Makapa led Silk Smitha team clashed with Azhar led Super Heroes team as the match proceeded towards the finals. The 90-minute fast-paced action ended with Sun Super Heroes winning the match by 14 runs, bagging the cup, and a cash prize of ₹1.5 Lakh. Sun Super Heroes’ Ajay was adjudged the ‘Man of the match’ and received a Kick-start cycle from Teslat while Silk Smitha’s Sujith was declared the ‘Man of the series’ and was awarded a LG refrigerator sponsored by Sathya Home Appliances.  Mr. Mohan Babu and Mr. Saravanan from the title sponsor Marc team and Mr. Krishna Raju from the Powered by Sponsor Your Backers happened to be the chief guest of the concluding event and handed over the trophies, gift hampers, and awards to the winners and others.

Nirosha Radha, the daughter of Tamil Cinema Industry’s Pride, the great M.R.Radha, had a critically acclaimed career in the Tamil, Telugu, Malayalam, and Kannada film industries right from her blockbuster debut in Agni Natchathiram (1988) with over 100+ movies and TV serials down the books. Box Entertainment, a Film & Television Production Company by Nirosha, is an entity focused on innovative concepts with a fresh approach and has been associated with a lot of high-profile productions.

Media Cricket Championship was an initiative launched by Nirosha to celebrate the love and passion that people from the industry share for the sport. Soaring temperatures and the blinding summer sun posed no hindrance to the edge-of-the-seat cricketing action that the media industry came together to celebrate as one.

Chennai Kaalpandhu League To Kick off on 10th October !!