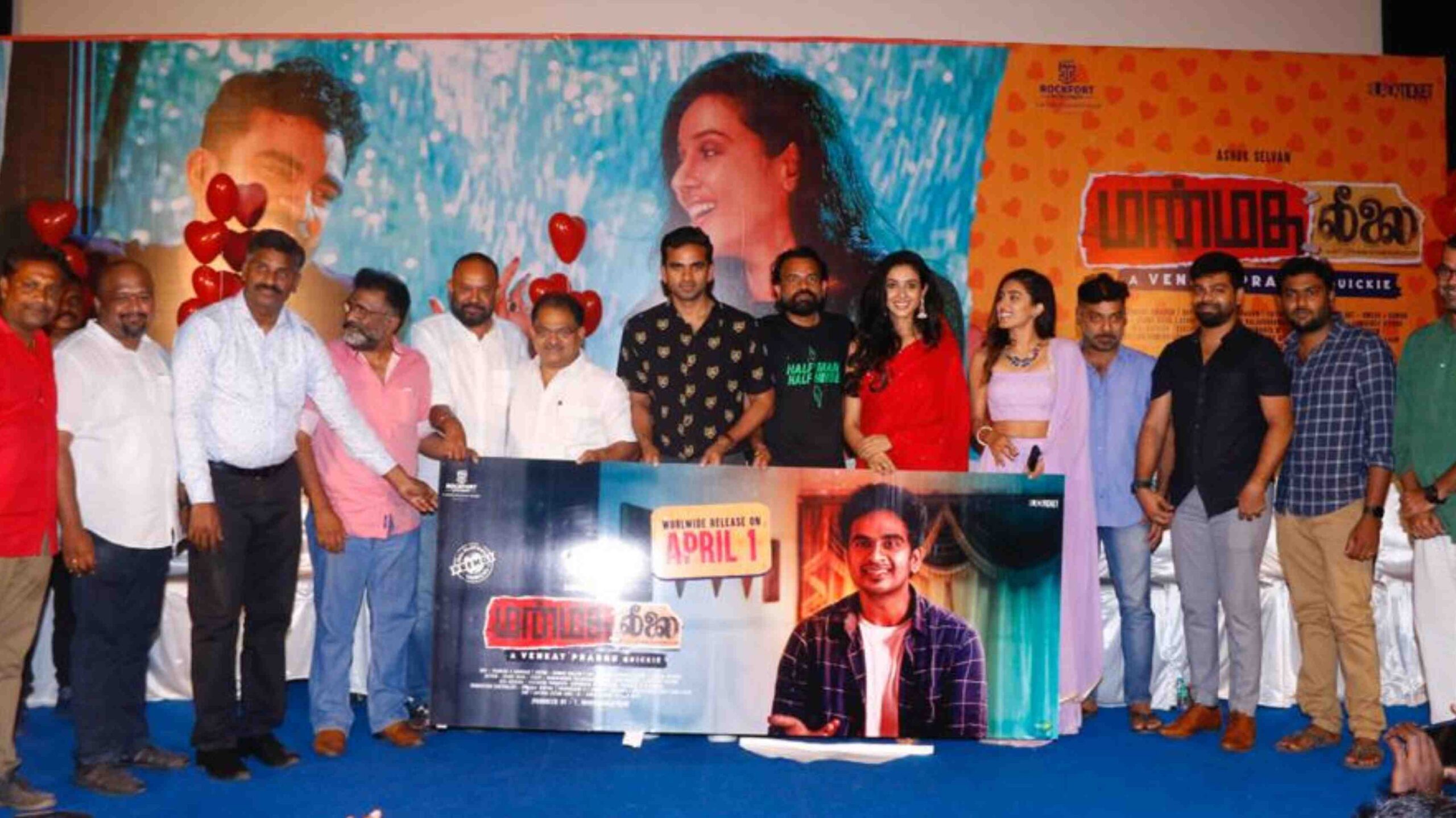 Producer T Muruganantham of Rockfort Entertainment in association with Black Ticket Company is producing the film ‘Manmatha Leelai’, which is directed by Venkat Prabhu. The movie features Ashok Selvan in the lead role, and it’s about a fun-filled cupid boy character of the contemporary times, narrated with commercial elements. The film is hitting screens worldwide on April 1, 2022. The entire cast and crew of the movie interacted with press and media fraternity. Rockfort Entertainment creative producer K.B.Sriram gave welcome speech

During this occasion, On behalf of Rockfort entertainment, Rs. 5Lac cheque amount handed over to Shri. Poochi Murugan, Vice-President of Nadigar Sangam, as a token of contribution towards the development of association.

Amma Creations Producer T Siva said, “The film doesn’t have any obscenity or vulgarity. Everyone is aware about the classic movie ‘Manmatha Leelai’ made by Veteran filmmaker K Balachandar sir. If he was alive today, this would be an eligible one to be titled as Balachandar’s ‘Manmatha Leelai’. The film can be watched along with families and kids in the theaters. (Jokingly) To be honest, Ashok Selvan should have not asked for remuneration for this movie for he has enjoyed the best privileges. The film will surprise with lots of twists as in Maanaadu. Ashok Selvan is the contemporary Gemini Ganesan. This movie will be a great entertainer to watch and enjoy in the theaters.”

Actress Riya Suman said, “The film is completely different from what I have done before. I thank Venkat Prabhu sir for giving the great opportunity to work with him, especially for giving the character ‘Leela’ for me. It was totally fun working with Ashok Selvan. Everyone can enjoy watching this movie in the theaters.”

Cinematographer Tamizh A Azhagan said, “It’s a great opportunity to be working with Venkat Prabhu sir. Ashok Selvan is my college senior, and it was a wonderful moment to be working together with him. I have worked with Samyuktha in a Telugu movie, and it’s great to be working with her in this movie as well. I assure that Manmatha Leelai will be a delightful and enjoyable theatrical experience for everyone.”

Actress Samyuktha Hegde said, “I am so glad and delighted to be a part of this movie. The movie is getting released on April 1, 2022 in the theaters. Initially, we had decided to get the movie for OTT release even before the commencement of shoot. It’s really exciting to see that our movie is scheduled for a theatrical release now. I am sure, everyone will enjoy this movie.”

Actor Ashok Selvan said, “During my college days, I enjoyed watching Chennai 600028 in the theater along with my friends. I never imagined that I would have an opportunity to work with such an amazing filmmaker like Venkat Prabhu sir. The idea to make Manmatha Leelai actually happened during the COVID times. After we finalized the project, I was affected with COVID, and those Liplock scenes were shot only after it. I am glad that heroines didn’t get affected. Many questioned me on why I chose Manmatha Leelai. I would like to make it clear that the film doesn’t have any obscene or vulgarity. It’s a good movie-a good entertainer indeed. I want myself to be known as an actor, who can experiment in any given roles. I thank the entire team for giving me an opportunity to be a part of this project.

Cinematographer Sakthi Saravanan said, “Cameraman Tamizh A Azhagan is a good natured person. We can make a film based on his real life Leelais as well (Jokingly). Venkat Prabhu always makes sure of keeping his cinematographers in comfort zone. The music has come out really well. The movie has shaped up decorously, and it will be a delightful treat in the theaters.”

Producer Singaravelan said, “In the recent times, Venkat Prabhu is proving to be an unparalleled exemplification for his brilliant screenwriting. He had showcased his extraordinary screenwriting proficiency in the movie Maanaadu. I am confident that everyone will acclaim his writing part in Manmatha Leelai as well after the film’s release. Maanaadu has earned a big profit for everyone in the trade circle, and this movie is going to be a delight for the traders again.”

Actor Nithin Sathya said, “I have already watched the film, and I can assure that it’s not an adult movie. This is going to be an ultimate Venkat Prabhu treat. I am jealous of Ashok Selvan now. Manmatha Leelai is going to be a sure-footed winner.”

Music director Premgi Amaran said, “I am elated to have composed music for my Brother Venkat Prabhu’s movie that is getting released in the theaters. The film is a tailor-made treat for the married couples. The story is set in two different periods – 2010 and 2020. The movie is for audiences from all walks of life. My elder brother’s brain is awesome for he keeps surprising us with different and unique themes from one film to the other. The film has lots of clap worthy moments. I request everyone to watch movie in the theaters and enjoy it.”

Poochi Murugan, Vice-President, Nadigar Sangam said, “Usually, I don’t attend film related events. They invited me promising that they are going to make monetary contribution towards Nadigar Sangam, and I assured them that I will come walking to the venue. Manmatha Leelai is not going to be an adult movie, and I strongly believe in Venkat Prabhu. He along with his brother is delivering commendable hits, and I wish the entire team for the grand success of this movie.”

Director Venkat Prabhu said, “I have made this movie based on the three pillars, who are three assistants. The first one is my assistant Manivannan, who has written the story, the other one being Premgi Amaran, the assistant of Yuvan Shankar Raja, and cameraman, Tamizh A Azhagu, assistant to cinematographer Sakthi Saravanan. I can assure that Manmatha Leelai is not going to be an adult movie. It has no vulgarity or obscenity. Even I have daughters, and I always make movies as a responsible filmmaker. I thank the entire team for their wonderful contribution towards the movie. Ashok Selvan and other actors have done their best. I assure that the movie will be a fun-filled entertainer to watch with families and friends in the theaters.”