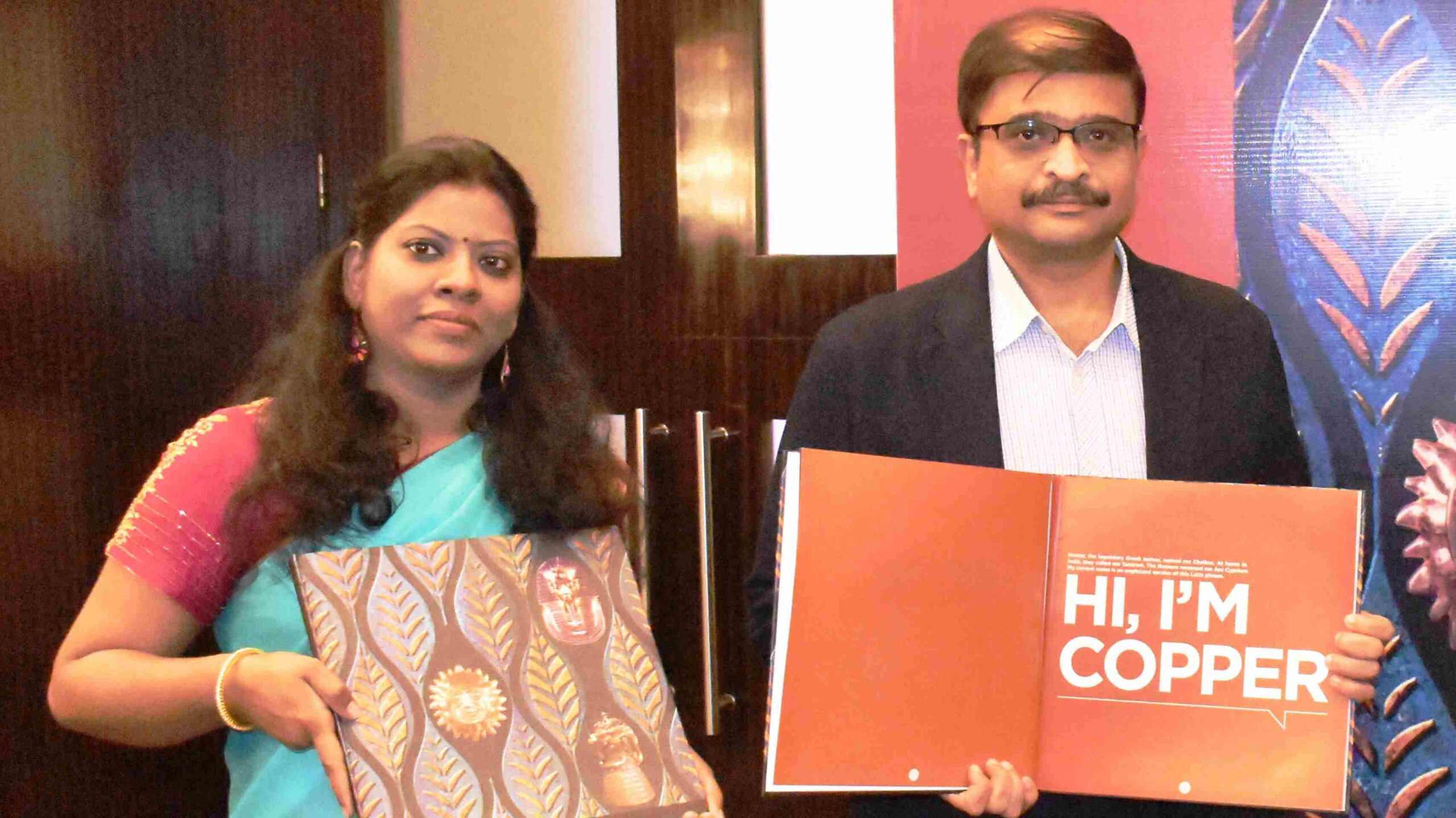 May 20th 2022, Chennai: Highlighting the importance of copper and its contribution to the modern world, Sterlite Copper launched a Coffee Table Book, showcasing its origin and its definitive role in shaping the modern world, at the SICCI CXO Conclave, held in Chennai today. Unveiled by Mr. Mayur Karmakar, MD, International Copper Association, India, with Ms. A. Sumathi, Chief Operating Officer, Sterlite Copper, the 70- page book comes with an interesting title “Hi I’M COPPER”.

The book traverses the entire journey of copper from its discovery in 9000 BC in an Egyptian river to the current times, focusing on its integral role in creating the modern world as we know it today. The book also traces the lifecycle of the metal and covers the entire gamut of its industrial and sectoral usage ranging from Power, Defence, Automobiles, Healthcare, FMCD among others.

Speaking at the launch of the Coffee Table Book, Ms. A. Sumathi, Chief Operating Officer, Sterlite Copper said, “We are delighted to unveil the Copper Coffee Table book “Hi, I’m  Copper.”  The book aims to essay the journey of Copper and Sterlite’s  smeltingstory.Over the last 25 years, Sterlite Copper has leveraged on technology to upgrade its processes and we had always benchmarked our practices to theglobal standards in terms of energy efficiency, copper recovery, effluent treatment while being sensitive to our corporate ethos of ESG standards.

Read Also  Mercedes-Benz launches the most advanced C-Class in Tamil Nadu; aims for a strong growth for the market in 2022!

The book highlights how Sterlite Copper, which began with a 100 KTPA Smelter in the year 1996, went on to become the largest supplier of Copper in India, meeting nearly 36% of the country’s copper demand by 2018. The operations of the plant are also benchmarked against global best-practices, with certifications in Quality, Environment, Occupational Health & Safety, Energy.  The plant has also invested heavily in environmental safeguards such as Gas Scrubbers, Effluent Treatment Plants and Reverse Osmosis Plants in order to ensure a safe and sustainable operation in Thoothukudi. The plant has been certified for its Zero Liquid Discharge, Water Consumption Management, Waste Reduction and Repurposing Waste towards Sustainable Applications.

The book also clearly brings out the economic benefits of the Thoothukudi plant in Tamil Nadu. It had emerged as a pillar of support for the community and a provider of livelihood to thousands of people. The plant engaged about 1000 trucks/tankers on daily basis with consistent load, thereby providing livelihood to around 9,000 truck drivers and cleaners per month. It had over 650 supply and service partners and helped them generate a business of close to $134 million every year. The total number of dependent domestic companies for supply of raw material from Sterlite Copper was 381 and contributed approximately $295 million to the exchequer. Additionally, it provided more than 17% of Thoothukudi port’s total revenue. Even the by-products of the copper smelting like sulphuric acid, phosphoric acid, gypsum and copper slag act as critical input for a number of important industries. While sulphuric acid is the primary raw material for chemical and fertiliser, gypsum is a key ingredient for cement production.

AddsMs. A. Sumathi, Chief Operating Officer, Sterlite Copper:“Copper is the third most used metal in industrial and civil applications across the world and its constantly increasing demand increases the need for production, thereby having a direct impact on employment opportunities & downstream industries. We at Sterlite have created a direct employment for 4000 people and impacted more than 20,000 people engaged in various supplier and customer units. Through the book, we want everyone to become aware about the journey & importance of copper and Sterlite, which together contributed immensely to the overall economy, not just at a national level, but also at a State and District level.”.

Prof. Ashutosh Sharma,Institute Chair Professor, Department of Chemical Engineering, Indian Institute of Technology, Kanpur & Former Secretary, Department of Science & Technology, Government of India, who wrote the foreword for the Coffee Table Book, says, “I believe Copper is one of the key drivers of Industry 4.0 and beyond. An invisible enabler, copper’s role in the future of our world will be all pervasive from our homes to outer space explorations.”

“I’m delighted that the importance of copper is being covered in a comprehensive way in the book being launched today. I wish to congratulate the team Sterlite for conceiving and executing this much needed document of value to its many stakeholders from the traditional industries to Industry 4.0 and Digital/cyber technologies.”, Prof. Ashutosh Sharma added.

Also speaking at the occasion of the Coffee Table Book launch, Mr. Mayur Karmakar, MD, International Copper Association India said, “Copper is the third-most-essential metal in the world, contributing to the environmental and socio-economic development across the globe. The demand for the crucial metal, which is a key input for multiple sectors, is expected to further raise sustainable growth in the post-pandemic scenario.”

Another significant aspect of the book is that it brings into focus, the role of the company in building an aspirational and empowered society with all the stakeholders working in tandem for the common good all.   For instance, under the Muthucharam initiative, the company plans to build a smart school and a well-equipped hospital for the community. Plans are also afoot to plant 1 million trees to make Thoothukudi, one of the greenest cities in India.  Other initiatives include providing clean drinking water to every family in Thoothukudi. More than 2,300 families have already benefited from this project—Tamira Surabhi–till date.

Samco Mutual Fund introduces “TimerSTP” with an endeavor to scientifically time the markets and thus generate high alpha over benchmark returns for investors!!

One8 innerwear launches a new collection of luxury innerwear range for men !!