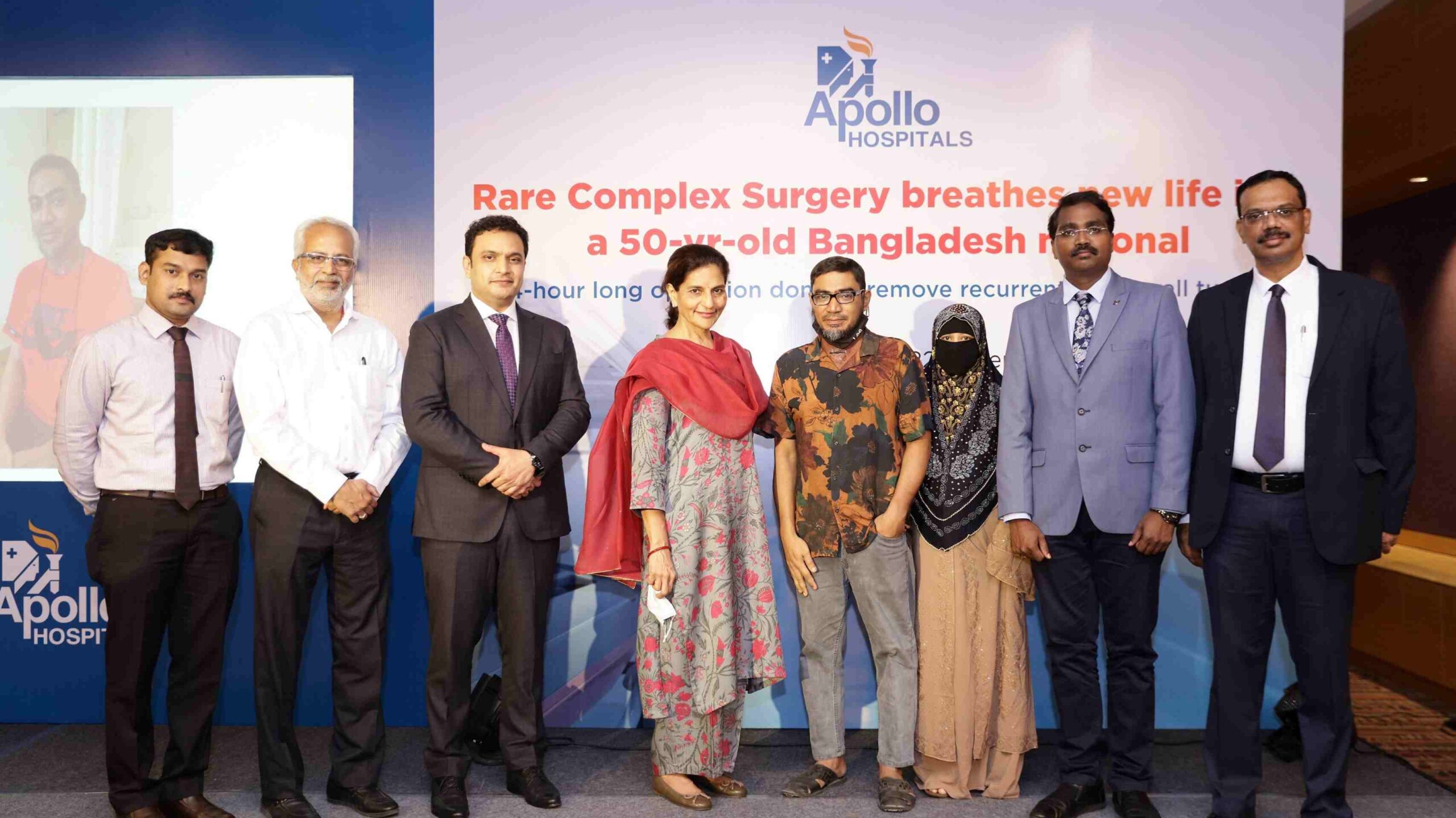 Chennai 26th April, 2022: A multi-disciplinary team of specialist at Apollo Hospitals Chennai, Asia’s largest and most trusted multi-specialty chain of hospitals, performed a remarkable surgery on a 50-year-old Bangladeshi man to remove a rare recurrent chest wall Chondroscarcoma tumour. The tumour was safely removed, and the chest wall was reconstructed using synthetic materials and back muscle tissue. A new chest wall was formed after the sternal bone was repaired with bone cement wrapped in a mesh.

Mr. Abdullah, a 50-year-old Bangladeshi gentleman, reported to Apollo Hospitals in Chennai with a tumour developing from his rib in his chest wall. The tumour began as a swelling in his chest wall in November 2020, and he was assessed and operated on in December 2020 in his hometown of Bangladesh. The tumour was discovered to be a chondrosarcoma, which is a cancerous tumour that arises from the cartilage that joins the rib to the spine.

The surgeon in Bangladesh, has removed the tumor along with his left first and second rib. Unfortunately, his tumour recurred within 6 months of surgery, in May 2021. It was much larger and growing rapidly this time. Mr. Abdullah decided to seek opinion from higher centers in India as there was no expertise and infrastructure support to perform such an operation in Bangladesh.

The most effective treatment for chondrosarcoma is surgery, however his tumour in the chest wall was enormous and widespread, involving vital neck structures and huge veins originating from the heart. He was started on chemotherapy at another institute prior to coming to Apollo Hospitals in an attempt to decrease the tumour, despite the fact that it is not standard of treatment. His tumour in the chest wall did not diminish despite chemotherapy and targeted therapy, and it continued to grow in size.

Speaking about the complexity of the disease, Dr. Ajit Pai, Senior Consultant in Surgical Oncology and Robotic Surgery, Apollo Hospitals, Chennai said, “The lesion comprised three components, one each in the neck, chest wall, and inside the chest, squeezing the key structures in the neck, the heart, lungs, and the major vessels.  Patient started to develop difficulty in breathing, difficulty in swallowing and chest pain. Multiple centers across India were hesitant to offer surgery to him owing to complexity of the lesion and the perceived low probability of success.”

He added, “At this juncture, he reported to us and we thoroughly evaluated him. His scans revealed a tumor in the chest wall and neck with involvement of sternum (central chest bone), collar bone, ribs, important vessels in the chest and neck (aorta, carotid and subclavian Vessels) and the wind pipe (trachea).”

The patient underwent a 14 hour surgery on 25th of February 2022 and his tumor along with part of the sternum, 3 ribs on each side and collar bones was removed completely. The vital blood vessels were preserved because of careful preoperative planning and meticulous surgery. The chest wall was reconstructed by the plastic and reconstructive surgeon with synthetic materials and tissue from the back muscles. The sternal bone was reconstructed with bone cement encased in a mesh and a new chest wall was created.

Appreciating the team of doctors Ms. Preetha Reddy, Vice Chairperson, Apollo Hospitals group said, “We have always believed that harnessing the right technology and combining it with medical expertise help work miracles. This case is one such example, we are happy to be setting high standards in patient care. At Apollo Hospitals, we put the patient first in all we do and deliver world-class treatment that is both accessible and affordable. We are convinced that such medical milestones will alter the lives of many more individuals who are in dire need.”

Mr. Abdullah recovered well in the post-operative period without major complications with intensive post-operative care in the CCU. The Biopsy report confirmed that his Cancerous tumour was removed completely with negative margins and he is currently undergoing radiation therapy which is an adjunct to the surgery.  His surgery and uneventful recovery have given him a new lease of life and a prospect of cure, which seemed a remote possibility a few months ago.